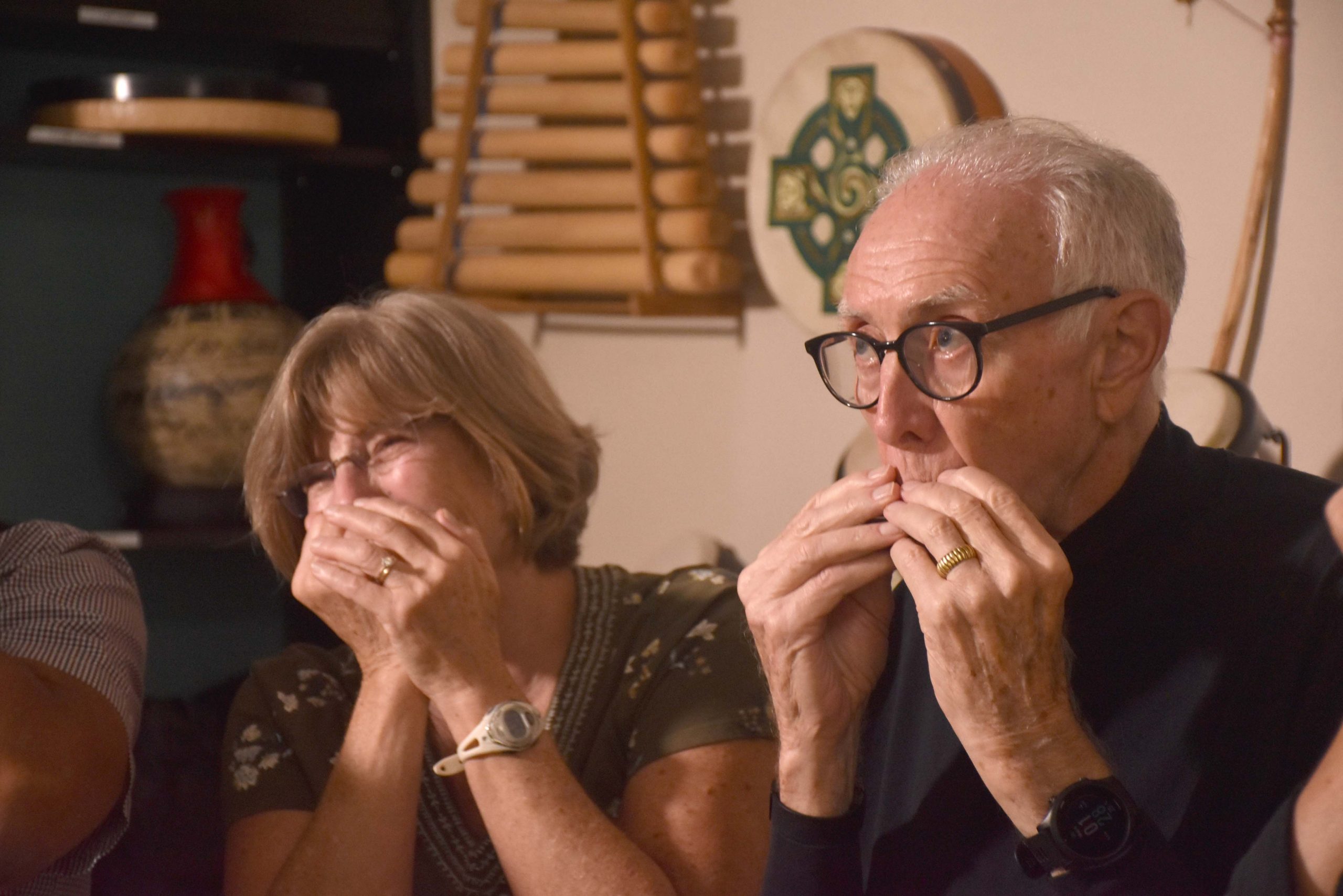 How can something as simple as singing a song make an impact on the lives of Parkinson’s patients? MusicWorx’s AudAbility Voice program provides a tangible answer to that question: so let’s answer it.

The chance to work with Parkinson’s patients is one that I have been looking forward to since I first read about the impact of music therapy with this disease. I found myself intrigued by the nature of the disease, as well as the function of music in partnership with its symptoms. The crossover of music and the brain and the body drew me in time and time again as a setting where a real impact could be made. But before diving into the multitude of benefits that music therapy has to offer, we need to understand the nature of Parkinson’s Disease.

Parkinson’s is a neurodegenerative disease that affects the dopaminergic neurons in the brain, causing a variety of symptoms throughout the brain and body.

What does this mean?

Neurodegenerative speaks to the process of a progressive decline in the functioning of part of the nervous system: in Parkinson’s, the part of the nervous system that is more heavily affected is the part of the brain that produces the chemical dopamine (i.e. the dopaminergic neurons). While many of us know dopamine to be the brain chemical associated with pleasure, it is also associated with movement. We see this decrease in the production of dopamine through common symptoms of Parkinson’s such as tremors, muscle rigidity, and bradykinesia, or slowed movements.

Other symptoms of Parkinson’s include:

Parkinson’s is the second most common neurodegenerative disease, next to Alzheimer’s Disease, and affects mostly men (a rate of 1.5 times more than women) aged 60 and older. Presently, the disease does not have a known cause, but we have some knowledge that its onset can be a result of both environmental and genetic factors. Some of the genetic factors include a family history of Parkinson’s, as well as the presence of a gene mutation, though the latter is rare. Environmental factors include exposure to toxins and head injuries

Music therapy has the ability to target many of the symptoms of Parkinson’s Disease directly. While there is no reversal or removal of any of the symptoms brought about by Parkinson’s Disease, symptom management and the maintenance of abilities (for example, muscle mass, gait, vocal strength, etc) are some of the biggest benefits that music therapy has to offer. One study from 2017 produced significant results in regard to the use of therapeutic singing improving “respiratory control, swallowing, and [quality of life] in persons with [Parkinson’s Disease]” (Stegemöller, E. L., Hibbing, P., Radig, H., & Wingate, J., 2017). Because Parkinson’s Disease so heavily affects muscle usage, the diaphragm and vocal cords are not left untouched by the disease. As the disease progresses, individuals commonly will begin speaking at a lower volume, struggle to speak for lengths at a time, or find difficulty taking deep breaths without intentional focus. Especially when it comes to the way respiration is affected, the inability to take fulfilling breaths can cause issues with sleep and relaxation because of a lack of proper airflow to the brain.

Another study showed the benefits of group music therapy for people with Parkinson’s and found significant results pointing towards improved quality of life, increased socialization and motivation, and increased/maintained strength in their vocal production, swallowing, and breathing abilities (Stegemöller, E.L., Hurt, T. R., O’Connor, M. C., Camp, R. D., Green, C. W., Pattee, J. C., Williams, E. K., 2017). As seen in the previous study as well, the ability to swallow is something that is affected by Parkinson’s Disease and must be addressed. Swallowing difficulties, as well as a decrease in appetite that can be a symptom of Parkinson’s, can lead to weight loss; severe weight loss can lead to overall health and immune system complications. The ability to maintain swallowing functions is vital for symptom management.

Still, another study found that music therapy interventions significantly improved speech intelligibility and vocal intensity, both of which are heavily affected by Parkinson’s Disease (Haneishi, E., 2001). The research currently available shows that music therapy has many benefits to offer in its role with Parkinson’s patients.

By targeting areas such as socialization and quality of life, music therapy is able to help mitigate the presence of isolation and depression, which are common in Parkinson’s Disease. Targeting these areas also help to increase motivation and promote relaxation, which can be key when it comes to exercising the voice, brain, and body for strength and function maintenance, improving sleep and rest, as well as overall symptom management.

One of the things I was taught when I first started working with the AudAbility Voice group is that singing is a natural dopamine producer; therefore, singing focused groups like these have an inherent benefit to them. The aspect of socialization, therapeutic singing, and interventions that directly target the symptoms of this disease help to provide group participants with tools that support their success outside of the group as well.

So what does an AudAbility Voice session look like? What do we do in these sessions and what are the benefits to group members?

Stemming from the existing research, MusicWorx’s Lindsay Zehren, MT-BC created a protocol for the AubAbility Voice program (as well as others) that directly targets key symptom areas of Parkinson’s. While the group has shifted to online in light of COVID-19, the structure of the group has remained the same and still holds the same benefits.

“MusicWorx’s AudAbility(™) program helps people with Parkinson’s Disease to live out loud. We believe that living with Parkinson’s doesn’t have to be isolating or limiting. Through music therapy and wellness-based approaches, we empower individuals to cultivate a good quality of life.”

Group members meet weekly via Zoom for a one-hour class that consists of social interaction, singing, and intentional muscle work; things that might normally be hard work are hidden behind the opportunity to build relationships and sing some favorite tunes!

Each group starts with interventions to warm up the participant’s lungs, body, and voice through the use of breathing exercises, stretching and muscle warmups, and intentional vocal warmups. All of these are used to prepare the body for the session, to teach proper technique to avoid injury or harm, and to promote strength building and maintenance of the respiratory system, vocal cords, and the diaphragm. For example, one weekly vocal warmup is a diaphragmatic warmup that promotes breath support and strengthening of the diaphragm through deep breathing and controlled breath release. The rationale behind this is that through doing these specific and targeted exercises each week in group, and by teaching participants how to do them at home, we are providing them with the tools to keep specific areas of the body working at their top capacity for overall strength and support. Knowing how to efficiently breathe can assist in vocal intensity, which is helpful when communicating from anyone from friends to physicians; it helps to maintain a bit of independence and autonomy that can dwindle as the disease progresses.

One of my favorite parts of our vocal warmups are the tongue twisters.  Each week the group chooses from a list of tongue twisters to sing aloud; it might feel silly to sing the phrase “Chester cheetah chewed a chunk of cheap cheddar cheese” over and over again, but it is secretly helping with annunciation and speech clarity.  This highlights one of the best things about this group: its ability to target key goal areas through the guise of doing something fun.

Warmups are followed by a segment of therapeutic singing and music making as a whole. Different songs are taught and sung each week and cover a variety of genres to keep members engaged and excited. One of my favorite sessions that I have led was when the group sang “Blowin’ in the Wind” by Bob Dylan; this offered the group members an opportunity to solo and share their voices with the group!  Other favorite songs have been “Hey Good Lookin’” by Hank Williams, “I Walk the Line” by Johnny Cash, and “Blue Skies” by Irving Berlin.  Using songs familiar to the group members is a great way to learn more about them, and help them find commonalities between each other; we have often found ourselves lost in conversation about shared experiences.

At the end of the day, music is something that is enjoyable and brings people together. While the group members are learning functional skills and tools each week, they are also given the opportunity to meet and socialize with other individuals who understand their story. Music therapy has a fascinating role to play when it comes to Parkinson’s Disease, and MusicWorx AudAbility Voice helps give us a glimpse into the benefits of music therapy in this population. If you or a loved one have been diagnosed with Parkinson’s Disease, consider AudAbility Voice as a unique opportunity to learn and grow in the face of Parkinson’s. Never underestimate the power of music in the brain and body!

Learn More or Register for Classes