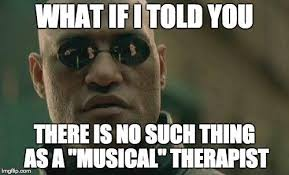 As time changes, words adapt and take on a multitude of meanings. In this same vein, new words are developed through various cultures and sub-groups within society. One of the biggest changes within the twenty first century is the development of slang through what has come to be known as “Meme Culture.” According to Collinsdictionary.com, the term meme derives from the word, “mimeme” coined by R. Dawkins. The definition of “mimeme” came to be known as: “a unit of cultural information that spreads from person to person.” The more modern term, meme, has shifted in the 2000’s to mean “a video, picture, or phrase, that a lot of people send to each other on the internet.” Something that is “viral” is something that is in high circulation but it is not necessarily a meme, it could be anything that is popular.

At this point you may be wondering, “Yeah, yeah, but what does this have to do with my sessions?” Have you ever been in a session where a child or adolescent said something in a group and everyone laughs? Did you find yourself confused and out of the loop? Here are five ways to become enveloped within meme culture, highlight current terms, and provide sample interventions so you may better understand the references that come up during sessions.

The first thing you will need to know about memes is where to find them. Memes began to gain traction through several sources, but for the sake of a fast and efficient way to learn these references, I recommend turning to old “Vine” videos or current “TikTok” videos. These sources are apps for your phone or device that contain short 6 second videos for comedic purposes. Often these videos are relatable to adolescents, which is why they have become viral. Though, searching through countless videos isn’t going to be fast and efficient for the working adult. I would recommend going to YouTube and typing in, “the best Vine/TikTok compilations” or visiting the links below.

Please Note: these videos may have cursing, and other sensitive content that could be offensive to some viewers.

“What Do You Meme?” may not be the most affordable option, costing you around $30, but it will immerse you directly into meme culture. The game requires you to use iconic “meme associated” photos and select one of the captions from a card you draw to describe the photo. This game may be a great tool for songwriting, where you have group members write down their captions and you read them aloud for the group. The key is to read them out loud yourself to censor any inappropriate responses that commonly arise within these populations. If you are working on socialization within your groups, you may adapt this intervention to have the clients read their own captions to the group and pay special attention to their references, because they often indicate how the client is feeling.

In contrast to the previous references, these apps will keep you up to date on the current memes that trend from month to month. These apps are particularly useful because they allow you to search memes on specific topics. Simply type in, “_____ memes” and you will get results! One of my favorite things to look up in my free time are music therapy memes because they help to validate feelings of success, sadness, irritation, and  joy that often arise within this ever changing profession. Ex: Below

This meme captures the frustration that may arise from misidentification from staff, friends, or even family members regarding your profession. Typically the format is: Cultural Reference + Specific Text = Meaning. Some memes found on these applications and across the internet already have culturally identified captions. As seen above, the caption of “What if I told you?” is so commonly used for this photo, that creators often just add the bottom line. This photo may have originally taken meaning from “The Matrix,” where it is derived from, but over time it has been adapted towards new meanings and has gained layers of complexity. As you dive into this culture, you will begin to see the patterns that arise and will quickly catch-on to these captions yourself.

There will always be subgroups of memes, just as there are inside jokes within professions. Below is a meme that references a general moment that music therapists are familiar with when working in a medical setting. Individuals outside of music therapy or outside of the medical setting may not find this reference as comedic. 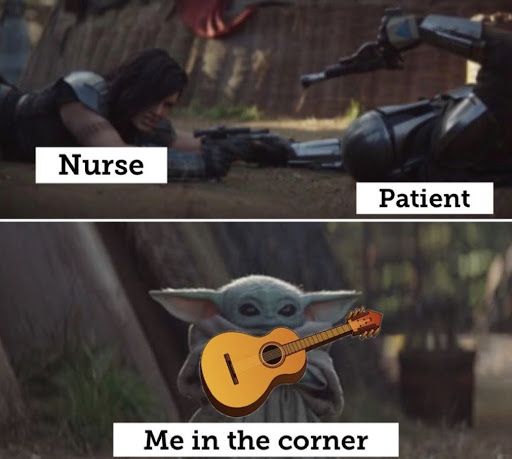 Reddit may be the most effective way to get immersed into meme culture, however, it is a quick spiral from casual browsing to full-on obsession. Reddit is not a site for beginners and serves as a more effective tool once you are already immersed in yourself in basic meme culture. Topics from music therapy to how to bake a turkey are covered on this site in the form of an open forum. Much like asking questions about music theory can quickly lead you into more than you bargained for, Reddit is so broad that you may become overwhelmed before you even start. There is no better way to become the first person to see a meme before it goes viral than to join this site or download the app.

Step 5: Become familiar with this list of slang that is often used in and out of memes

Adding these phrases or references to your music therapy toolbelt can dramatically change the speed of rapport building and the willingness for clients to participate in sessions. Through the utilization of these references, a clinician is showing their clients that they care about their interests and are aware enough to be someone clients can  confide in. Memes are so universally recognized by the current generation of children and adolescents that they are a familiar and approachable way to assess emotions, coping, and social skills. Try this exercise:

Show a client the following photo and ask them to create a meme for it. This example may be used to assess when or what makes a client feel alone or isolated. 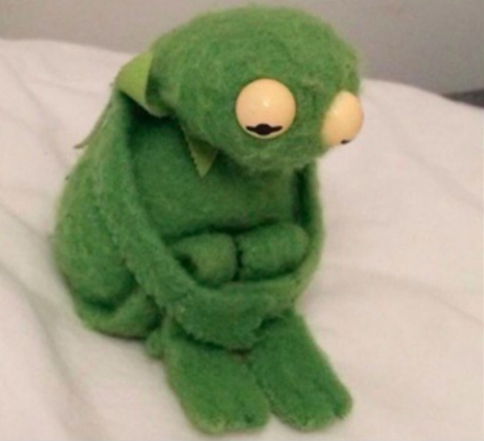 These references are starters to enter you into the world of meme culture. The foreseeable future is filled with memes and in the ever changing environment of children and adolescents, your content should adapt and remain relevant. Always feel free to ask clients what a word means and if all else fails you can look the word up on Urban Dictionary. Through the utilization of these strategies, the moment may come when you finally understand that reference you were always missing.