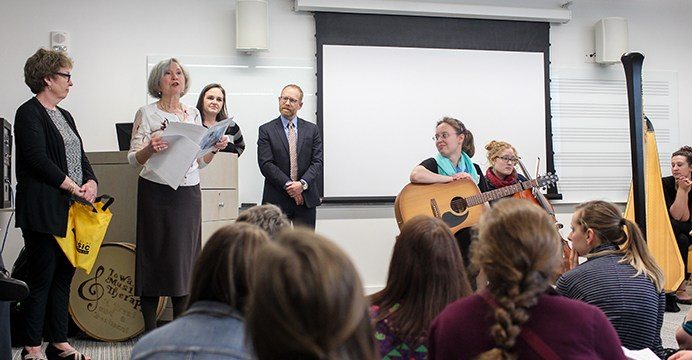 Some of the best music therapists in the nation returned to their alma mater on April 1 to celebrate 40 years of the University of Iowa’s music-therapy program.

“Music therapy is not really a new field … but people may have not heard of it so they think it is a new field,” said Clinical Professor Mary Adamek, the director of the Music Therapy Program. “But we have a really successful program at Iowa.”

Using music as therapy can improve social skills for children with autism, she said, in addition to dealing with numerous mental-health issues and even decreasing the perception of pain.

“Anywhere you can find a nurse, you could potentially find a music therapist,” Simpson said. “It’s an amazing thing.”

To celebrate the UI Music Therapy Program’s 40th anniversary, alumni gathered for a day of speakers and presentations, slide shows for each alum, and a reception that included a ribbon-cutting ceremony for the new music-therapy room in the Voxman Building.

Alumna Bethany Riedel, a board-certified music therapist working in Tomah, Wisconsin, for the Veterans Affairs, returned for the event to reconnect with old classmates and rejuvenate.

“Where I work, I’m the only music therapist, which can feel really isolating,” she said. “… [This event] is a great reminder, and it’s refreshing to me.”

Barbara Reuer, the CEO and founder of MusicWorx, a music therapy and wellness agency who received her doctorate at Iowa, was excited to be back.

“It’s always great to be around people that believe in what you do,” she said. “You get that booster shot every time you’re around colleagues like that.”

Reuer’s agency in San Diego takes on four interns every year, and she said the interns are often from the Iowa program.

Adamek said the program is very selective, and the faculty know each student. Usually, there are approximately 45 students at one time. There’s a level of excellence, she said.

Simpson, although not an alumna, agreed.

“I’ve always admired the quality of the education here and the caliber of the students who graduate,” she said. “They’ve gone on to be incredible leaders in the profession and really stand out.”

Simpson said more health centers and education facilities realize the importance of music therapy as a treatment option, so music therapy receives more attention and more students are entering the field. There are currently 7,000 board-certified music therapists in the nation, she said.

However, Reuer said, this is not enough, considering the benefits of music therapy.

“Seven thousand at this point can’t do all the work that needs to be done,” she said. “If you think about just school districts, there are 15,000 school districts. If there was one music therapist in each school district working with special ed, we’d be half there.”

UI student Brenna Oates, who is in the music-therapy program and helped run the event, said she was inspired by the outstanding music therapists, both professionally and personally.

“It’s one of those things where if I let myself think about whom I’m sitting next to, I’m going to get tongue-tied and flustered,” Oates said. “… It’s also a great opportunity to help out and give back to the program that as given so much to me.”

“Some of the people I’ve met [in the program] have affected the world in ways I can only imagine doing myself,” she said. “It’s a place that makes me want to be a better musician, a better therapist, a better person overall.”