The Benefits of Harmonica for People with Parkinson’s

In the summer of 2016 MusicWorx, Inc. wrapped up a successful AudAbility series. Fifteen People with Parkinson’s and their Care Partners completed six months of classes designed to empower them with exercises to increase volume of voice, breath control, and quality of life.

The program was a huge success, and before saying goodbye, the participants were given the opportunity to request new programming. A number of people were interested in learning how to play the harmonica. This accessible instrument is an excellent tool for strengthening the diaphragm, increasing lung capacity and breath control, and improving respiratory functioning related to swallowing. All of these benefits directly relate to symptoms of Parkinson’s disease.

MusicWorx has been running a harmonica program for people with Chronic Obstructive Pulmonary Disease (COPD) at Scripps La Jolla for over six years. As a music therapy intern, I created a protocol for this group that included deep breathing exercises, harmonica warm-ups, and harmonica repertoire. Using this protocol as a template, I wrote what is now Harmonica: A Breath of Fresh Air based on current research and evidence based best practice. This book is in the process of publication and will be available for purchase this spring!

The harmonica group has graduated its first participants in the initial series of classes since its start in August, and a second group has formed and is currently working to make beautiful music. We have seen some incredible results within the group. We are currently working to raise funds in order to conduct a full research study on the effects of harmonica playing on People with Parkinson’s, a subject that has not been researched to date.

One incredible outcome of the group is highlighted by John’s story. 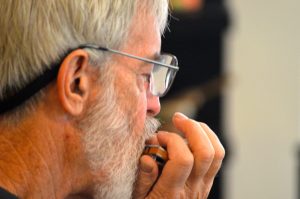 John was diagnosed with Parkinson’s disease in 2005 and referred to speech therapy due to difficulty swallowing in 2016. When harmonica classes were offered as a music therapy option, he was eager to try. Initially John could not even hold the instrument; however, his enthusiasm and determination led to amazing results. By week six, John was playing along with other participants and improvising on the harmonica. John began noticing that he no longer needed a second swallow after every bite of food and that his functioning on the spirometer and flutter valve became stronger and consistent. When John went for his speech therapy appointment following his participation in harmonica classes, he was told that he no longer qualified for the treatment due to significant symptom reduction. His wife said, “He brings to [harmonica class] an excitement and enthusiasm that no other program has instilled.”

MusicWorx will be offering a new harmonica class starting on April 5th! The class is open to People with Parkinson’s and their Care Partners and meets at the Music Wellness Center on Wednesdays from 10am – 10:50am. Registration is open now, and you can reserve your spot today!