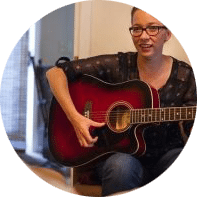 Music Therapy Can Lift Senior Health Along With Spirits 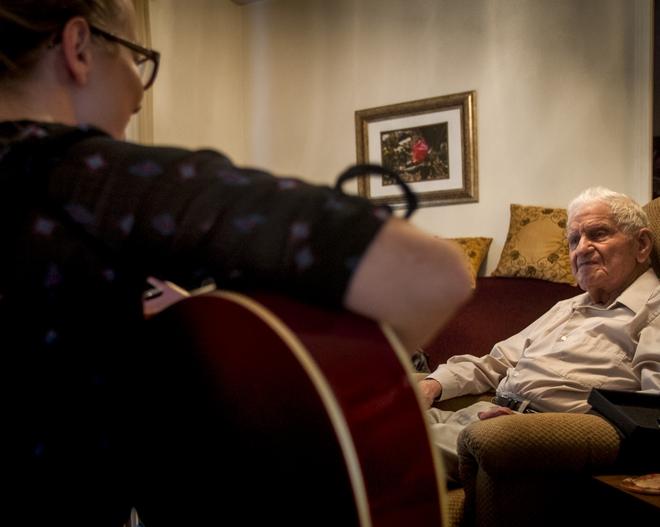 PEORIA — Music provides more than a chance to get loose on the dance floor or relive ones college days.

Katie Fitch of River City Music Therapy believes that music can have many benefits with people of all ages. “We can use music in a variety of ways with the older population. It can help someone who’s depressed as well as helping a stroke victim relearn language skills,” she said.

At 26, Fitch said she’s been focused on music therapy as a career since attending Richwoods High School. “I had a cousin who had a music therapist, so I knew that’s what I wanted to do,” she said.

The Peoria native went to the University of Iowa, “a school with a booming program in music therapy.” After graduation, she undertook an internship with a private music therapist in San Diego. Fitch returned to central Illinois, where she hopes to establish her trade. “I am devoted to this community. This community is very responsive to music,” she said.

While there are other nationally-certified music therapists in central Illinois, there aren’t many, said Fitch. “I’m proud to be a pioneer in this area. I’ve been advised to go somewhere where music therapy is better known and the field is more lucrative, but that’s not tempting to me,” she said.

“When I do pro-bono work, the response is amazing,” said Fitch, who maintains an office at First Christian Church, 6400 N. University St. “I’ve been at the church for about a year, but I have huge dreams for this stuff. I’d like to eventually set up something resembling a community center,” she said.

Music therapy can mean different things to different people, said Fitch. “The way we process music is rooted in the associations we have,” she said.

In order to help a patient, Fitch said she first gathers background information. “After I talk to as many people as possible, we’ll do a session,” she said.

Fitch constructs a session to meet the needs of an individual patient by using different means. A music therapist needs to consider the type of music and the timing of the music intervention to meet the goals of the therapy, she said.

“I sing and use guitar the most, but I also use keyboards, drums and the ukulele. But I don’t go for applause. Music can be used as an exercise,” said Fitch.

“Sometimes what I do looks and feels like a performance but the idea is to offer an interactive music experience. I use their reactions to a session to work on follow-up programs,” said Fitch. “Just push and play is not what we do. It’s a very intentional use of music.”

The feedback one gains is part of what makes a music therapist’s job meaningful, she added. “When you see the eyes of a patient with Alzheimer’s or some other form of dementia light up, that’s a positive engagement. It can be a huge step for the patient and open the door for other things,” she said.

Music therapy can be divided into both active — a patient singing, composing or playing an instrument — and receptive — listening or dancing to the music. Both methods have value in helping patients meet challenges, said Fitch, who conducts sessions both individually and in group settings.

There are also challenges for the people who help pioneer music therapy in central Illinois. “More advocacy needs to happen. We are seeing more referrals from doctors. That’s grown in just the past year. But funding is a challenge right now,” she said.

Another challenge is getting music therapy covered under medical insurance. “Illinois is still working on that. Other states are ahead of us there,” said Fitch, noting than an individual 60-minute session with a patient falls “in the $60 to $120 range.”

As for what kind of music a music therapist likes, it’s a broad spectrum. “In the winter, I like a strong beat and electronic sounds. In the spring, it’s country, folk, and bluegrass. Here in the fall, I like organic music,” she said.

Steve Tarter is the Peoria accountability reporter for the Journal Star. He can be reached at 686-3260 or starter@pjstar.com. Follow him on Twitter at @SteveTarter.