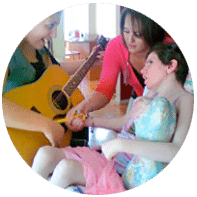 DV is a very thin and short 16-year-old girl with Rett Syndrome. She is nonverbal with physical and cognitive limitations.

During the first four music therapy sessions, it was difficult to engage DV in direct interaction. She resisted hands-on assistance and often pushed objects away when presented. Engaging her attention was difficult, too, as she fixated on specific objects to which she related individually and prevented others from entering her personal space.

However, DV’s fifth music therapy session provided a breakthrough. DV exhibited enthusiasm from the beginning. She approached the guitar immediately, and, with minimal prompting, began strumming. She also grabbed my hand and led it to strum the guitar. This interaction continued for approximately 25 minutes.

Using DV’s interest in the guitar, we extended her physical activity by moving the guitar up and down and encouraged her to reach it. She did. DV focused her attention on the various exercises presented throughout. She allowed physical contact, so we engaged her in movement and dance to music. DV even pushed my hands toward one another in order to clap after I had demonstrated with her hands over mine.

DV laughed audibly and demonstrated affection that day. As we ended the hour-long session by singing the good-bye song, DV surprised me with a spontaneous embrace—a touching close to a very successful session.