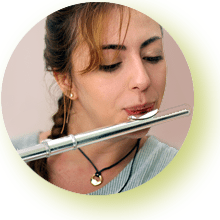 Sharon loved music, had played the piano when she was a child, and later in life, took up playing the organ. She played annual concerts for many years with a jazz pianist who lived in her building and also led frequent sing-alongs. When Sharon could no longer read music because of macular degeneration, she sold her organ. She had never learned to improvise or memorize music, so she couldn’t continue playing after age 92.

When Sharon began receiving hospice services, she was depressed and didn’t understand why God wouldn’t take her. Knowing her love of music, hospice then referred her to music therapy. So I began seeing Sharon once a week in her home. At that time she was 98 years young (about three years ago) and was still living on her own but was unable to participate in any of her hobbies (singing, dancing, bowling, or playing the organ) because of her declining health.

Within a few weeks of sessions her depression improved, and during one visit, Sharon told me, “You saved my sanity. Before you started coming, I wanted to die. I am still ready to die, but as long as you’re here, I’m happy waiting.” She started calling her hospice workers her “hospice angels.” Sharon frequently told the people around her how beneficial music therapy was. One day her phone rang during my visit and she told her caller, “I’m with my music therapist, and we’re working on my memory.”

Sharon loved hearing the flute, her favorite songs, and guessing the tune. Often she would hum along or play an instrument (especially the drums). Sometimes we wrote songs and recorded her stories, and other days she just needed to talk. One day her grandson (who is a drummer) called her and she told him, “This is your djembe-playing grandma.” Sharon frequently told me the story over and over again and was so delighted at his response to her saying that.

This summer Sharon had to leave her home and move into a home-care facility. Throughout this process, while it was stressful, she handled it gracefully and accepted the changes in her life. The staff saw how much she enjoyed music, and five people from her treatment team called to request that we increase her visits to twice a week. During the last couple of months, certain songs began to stick in her head and she would request them time and time again. Each song focused on a theme that related to her life, and she would ask me to read her the lyrics and then discuss the significance of the song.

From the time Sharon moved into the home-care facility, the same song, “There’s a Rainbow ‘Round My Shoulder,” was stuck in her head. While we joked about it, I know that the image of keeping a rainbow wrapped around her brought her a source of comfort. It was the last song that I played for her.

The last couple sessions she had, Sharon said her goodbyes to me. Her body was ready, and she was ready to go. I don’t think that I will forget what she said to me before I left last week: “Thank you. I’ve enjoyed every minute of it.” During my last visit, I was teasing her about my cat (which she adored), and I said that he wanted to come but couldn’t. She replied, “That’s okay, I love Teddy just the same. Just like I love you.”

This morning I woke up at 4:30 having dreamed of Sharon and could not go back to sleep because she was on my mind. So I got up and started writing her chart notes from Tuesday. Later that morning on my way to work, her social worker, and my good friend, called to tell me that she died overnight.

In thinking back about the time I spent with Sharon over the last three years, I have much to be grateful for. She was more than just a patient. I came to look forward to her friendship, advice. Just like every woman I know, she loved to hear about who I was dating and share her opinionated views about men: “They’re more trouble than they’re worth. Don’t look . . . the right one will find you when you least expect it,” and words of wisdom. The last piece of advice she told me on Tuesday was, “You only live once. Enjoy it while you can.”

While most of my patients are not able to express their gratitude or appreciation, Sharon took the time to do this. Not one session went by without her saying, “Do you have to go? Can’t you stay all day? I look forward to this all week long. You are the highlight of my week.” Or, “Thank you, Julie. I enjoyed it so much.” Talk about rewarding!

I can still hear her voice ringing in my head, “How’s my Julie? How’s my Teddy? Give him a hug for me . . . not too tight,” and she would laugh!

There’s a Rainbow ‘Round My Shoulder

There’s a rainbow ‘round my shoulder
And it fits me like a glove
Let it blow let it storm, I’ll be warm
‘Cause I’m in love

Hallelujah, how the folks will stare
When they see that solitaire
That my little baby is gonna wear

Hallelujah, how the folks gonna stare
When they see that diamond solitaire
That my own true baby’s gonna wear