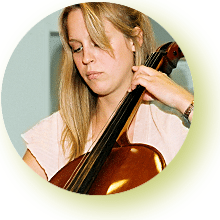 I was working with a fellow therapist who had brought her cello. It was a real treat to hear her play at bedside for all who listened. In particular, when we entered MP’s room, the patient told me that she had played violin and that strings were her favorite instrument. She was lying in bed in a pool of perspiration, looking very uncomfortable. She said she was in a great deal of pain, and it was one of the first times I could pull out the pain chart and have her rate her pain. She chose level eight (on a scale of one to ten) and agreed to some music played softly.

We began with the Canon in D and played for some time. As we played, MP’s face softened and she closed her eyes. Every once in a while she would jump from what I assumed to be stabs of pain. As we played, I suggested that she allow the music into the pain and breathe in the music, to let it soften her from the inside.

After our first piece, she said, “I think I’m at level six now.” We then introduced the top 30 song titles and asked if she preferred instrumental or sung music. She chose several songs, and two nurses stopped by to listen. It was obvious that MP was enjoying the music and was focused on listening. After a few selections, MP began to talk about her family and plans they had for when she went home. The music had distracted her from her pain. She now rated her pain level at 2.5.

I felt as if it was a real music therapy intervention. It was measurable, meaningful, and moving. It was art and science all rolled up together. I was very grateful that the music could provide relief for her discomfort. It was an encouraging and uplifting experience.