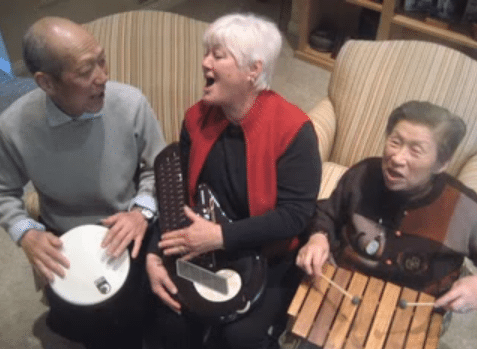 16 May In Clinical Music Therapy by MusicWorx Tags: Diversity

Music Therapy In The Melting Pot: The Increasing Importance Of Multiculturalism In The Future Of Music Therapy

Sankofa is a word that literally means, “go back and take” in the Ghanaian language Akan. Culturally, the symbol of sankofa represents one taking from the past what is good and bringing it into the present in order to make positive progress through the benevolent use of knowledge. The image used to depict this wisdom is that of a bird with its head turned backwards taking an egg off its back. In my own personal journey, I find that I often come back to this idea. It came as no surprise to me that as I contemplated music therapy in the next ten years, a tiny voice in my head said, “It is necessary to look back at where we have been and where we are now to understand where we are going.” And so, to look forward to the future of the field of music therapy, I have examined one factor that has changed a great deal in the last ten to fifteen years and will undoubtedly influence the future of our field.

With increasing talks of immigration reform, it is hard not to think about the changes our population has faced since the beginning of the 21st Century. According to the U.S. Census Bureau, the population of the United States increased 9.7% between 2000 and 2010 from 282.1 million people to 308.7 million people. Believe it or not the percentage of non-Hispanic white Americans decreased between the two censuses, from 68.9% of the population in 2000 to 63.7% in 2010. That means 5.2% fewer Americans who remember the Beatles appearing on Ed Sullivan, or were raised singing the standards of American folk music. And for music therapists, which translates to fewer clients whose preferred music can be found on the “Need to Know Before Leaving Internship” repertoire list (“Love Me Tender,” anyone?).

I have heard that minority groups will soon be the majority in the U.S. For instance, the Hispanic race saw a nearly 4% rise in population between 2000 and 2010, from 35.5 million people to 50.4 million people. 50.4 million people is over 16% of our total population. And as of 2010, Asian Americans comprise 4.7% of the total U.S. population, numbering over 14.4 million. And so, as the number of non-Hispanic white Americans slowly ceases to grow, I think it is safe to say that in the next ten years we will be hearing a lot more from this exciting, pentasyllabic word: multicultural.

In the next ten years, we will all need to adapt in order to provide each individual client with the same, high quality of service. Our field has a need for increased cultural awareness that extends beyond just music to include customs, norms, and differences. And by our field, I don’t mean the international music therapy community a whole; I mean the music therapy community on an individual basis. One by [MT-BC] one we will discover the need to diversify our own personal “bag of tricks.” We will have to understand the context of a number of different cultures’ words and actions. Thankfully, music is indeed the universal language. In that regard, we have job security and the hope of success. With applications such as Spotify and even YouTube, listening to and learning music from different cultures is easier than ever. The movers and shakers of our field understand the importance of multicultural music therapy; an increasing number of publications and presentations are available through the AMTA and its national conference, not to mention the World Federation of Music Therapy. It seems to me our world is always reminding us of what is changing. I feel as though I can’t even listen to NPR without being reminded of our place in the world and the diverse people in our own country. Now it is time for us to open our ears, listen and learn. Enjoy!