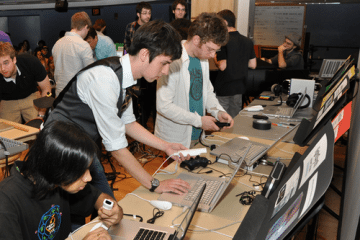 What is the future of music therapy?

Advances in research and technology are linking music experiences to actual biological responses in the brain and body, validating our field and providing explanation for treatment. At the MusicWorx internship, we work primarily in the medical setting and I find myself agreeing with the majority of literature looking toward the future of music therapy in medicine.

What are some of these resources?

One example of this can be seen in a 2011 article from the Berklee School of Music highlighting the latest developments in music and assistive technology (seen here: http://www.berklee.edu/news/3197/berklee-develops-new-technologies-in-music-thera).

One of these collaborations is between their Music Therapy and Electronic Production and Development departments; projects include motion-tracking video that analyzes the effectiveness of music therapy treatment in measuring change in physical therapy patients’ range of motion.

A 2005 article by music therapy researcher Dr. Michael Thaut similarly highlights a neuroscientific perspective on understanding music in therapy and medicine (seen here: http://www.ncbi.nlm.nih.gov/pubmed/16597779). Thaut talks of a shift in theory of music therapy clinical practice, and future work in rehabilitation and therapy.

The biggest shift, however, to affect the future of music therapy in medicine will be in understanding the effects of the Affordable Care Act, aka ObamaCare, for our field. As the ACA begins its gradual integration into the healthcare system, there are several possible influences that can be guessed at as relates to third party reimbursement for music therapy services. While Medicaid eligibility will be expanded to a lower income bracket, there are also $716 billion in cuts to Medicare Advantage and related services. As we continue to feel the effects of the baby boomers, the number of adults reaching retirement age and beyond is increasing rapidly, including well and unwell adults. For example, a recent statistic I learned at the San Diego Brain Health Fair is that the estimated number of adults living with Alzheimer’s will increase from 5.1 million in 2007 on to 7 million in 2030, to an estimated 11 million in 2050. As the speaker put it, the first step is not cure but prevention – slowing the avalanche of an epidemic.

My belief and hope is that as music therapists continue to work not only as clinicians but also as researchers, we contribute to our evidence-based practice so that the question of funding eligibility isn’t even a question.